Terror in the Suburbs 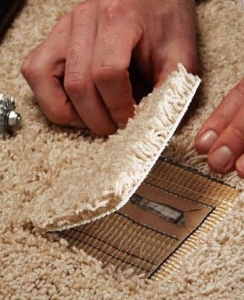 How I Hacked Up A Customer’s Carpet and Why She Loved Me For It:

The home was worth north of a million dollars. The carpet alone was worth more than my entire house. And there I was, past the point of no return, cutting into it with shaky hands and a shiny new carpet knife. Would the homeowner–my customer–know this was my first real carpet repair? Would my gleaming new tools tip her off that I’d never done this before?

I’d been cleaning carpet for this particular customer for a few years. Let’s call her Sally. At first her beautiful, perfect home was a little intimidating, but after a few visits we’d become quite comfortable with each other.

One day, while Sally was rearranging some furniture, she discovered a huge, perfectly round carpet stain under the very large clay pot of her ficus tree. Despite my best efforts, I just couldn’t get the stain out. Sally was willing to live with the stain, but I didn’t want her to always have it in the back of her mind.

For some time, I’d been practicing carpet repairs in my shop. I was learning how to “patch” carpet (the technical term is “bonded insert”, but that sounds a little goofy to me) because I wanted to be able to offer this service to my customers. I’d reached the point where I felt pretty darn impressed with my abilities, so I decided to tell Sally her stain could be patched.

Of course, feeling happy with my skills in the shop and feeling happy with those same skills in a million dollar home are quite different things, and in all truthfulness, I half-hoped Sally would reject the idea or that she wouldn’t have a remnant of carpet we could use to replace the stained area. To my horror, she thought it was a splendid idea, and she even had a large, leftover roll of this carpet in the attic. Oh boy…the jitters were already starting.

A week later, I came back to Sally’s house to patch the stain. In short, you cut out the damaged piece of carpet and replace it with a new piece of the exact same size. Sounds easy on paper–heck, it WAS easy in the safety of my own shop–but in practice it’s flat out terrifying. Especially in a home as nice as Sally’s.

I worried about everything. Would I cut out a crooked square that looked ugly? Would Sally notice how frightened I was? Would she see my new tools and figure out I was a complete charlatan (that’s certainly how I felt about myself at the time)? Could I manage nice, straight seams when it came time to set the new piece of carpet? There was a lot to worry about!

But without a doubt, the worst part is that first cut. It’s truly the point of no return. Imagine whipping out a knife and hacking into a very expensive carpet while the homeowner looks on…all while a raging case of self-doubt is working very hard to convince you that you’re about to crash and burn, that you should tuck tail and run away while you still can.

I placed my seam tape where it goes, fired up my seam iron, and had a brand new piece patched in with no trouble at all. I couldn’t believe it! That nasty old stain was soon to be a distant memory, and my first real patch was nearly invisible! Sally hadn’t even discovered me to be the charlatan I feared I was. In fact, she was downright gleeful!

And so my career as a carpet repair expert began. Since then I’ve done a thousand patches. I’ve fixed broken seams, ripped edges and wrinkles and buckles all over the city. I’ll never forget that first job, though. It was about as nervous as I’ve ever been, but the reward was sweet and long-lasting.

If you need any carpet repair or cleaning, I’d love to be your guy. You can feel free to call anytime and I promise I’ll take good care of you. These days, you won’t even see shaky hands or a sweaty brow!