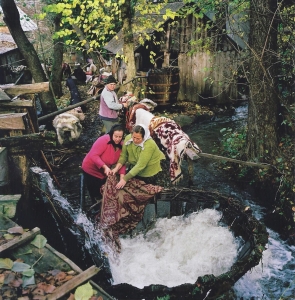 Americans are terrified of wool. We think it’s this exotic, alien stuff that will shrivel and disintegrate if we make one wrong move. We think it has to be dry cleaned and babied. In reality, wool is very hearty and pretty darn resilient. Think about where wool comes from…It doesn’t seem to have any problems when it’s growing out of a silly sheep whose idea of a good time is rolling in dirt and pooping on itself. By the time wool is processed and treated for sale by humans, it’s fully capable of taking care of itself.

As a matter of fact, in many lands, wool is so common it would be weird to see carpet or even upholstered furniture made from anything else. Yep, the rest of the world seems to be at peace with wool, so why are Americans so intimidated by the stuff? Well, I have a couple of theories about that. As you may or may not realize, I’m the local wool expert around here, so I may know a thing or two.

First, wool is usually relatively expensive here. Whether a rug or a nice sweater, wool items generally cost more than their synthetic counterparts. I think that gets into our heads, and we start to freak out about it. Naturally, the tendency would be to worry more about something you spent a lot of money on. But it’s a real trip, because although a wool sweater (or rug) might cost more than one made from cheap acrylic, it will last much longer and stand up to way more abuse.

Second, since we don’t encounter wool everyday, it’s kind of a novelty to those of us on this side of the drink. We end up coddling and babying wool like it’s this delicate stuff that will wither and die without the proper care. Meanwhile, our Kiwi friends in New Zealand are spilling beer and having bar fights all over their wool carpet without giving it a second thought.

Check out the picture I posted above. Hopefully I won’t get sued for using it because it came out of a National Geographic from July, 2013. As soon as I saw it, I cut it out (no, I didn’t steal it from my dentist’s office–this was my own copy, thank you very much) and scanned it onto my computer because it’s so cool. The lovely ladies pictured are washing wool rugs in a Romanian river. Yes, you read that right…in a river.

They load this giant wicker basket up with as many rugs as they can cram into it, then drop it into the river for a few minutes. The sheer volume of the swift-running, clear water flushes all the dirt and crud right out of the rugs and they come out squeaky clean and good as new.

Now, you may have spent some good money on your rugs (5 or 6 figures isn’t uncommon), and I’m not saying I’d clean them by throwing them in the Colorado River, but believe me–they are much, much heartier than you might believe. Just because they cost a lot doesn’t mean they are fragile. The expense comes from the thousands of laborious man hours it took to weave or knot the rug. In other words, the great cost of a fine rug does not mean it’s a giant wimp that will disintegrate when it’s cleaned.

Obviously, you still want to find someone who will care for your fine rugs and treat them with the respect they deserve. It also helps if that person is properly insured, and preferably so out the proverbial wazoo. And if you happen to be looking, I am such a person, so feel free to contact me.

I’ll come pick up your rug and immediately transport it to my facility (I won’t let it roll around in the back of my van all day like I’ve seen some of my competitors do). Before I clean a stitch of the thing, I’ll spend a good deal of time gently vibrating the loose, dry soil out of the fibers. Then, I clean it by recreating what would happen if your rug were submerged under a rushing, crisply fresh, cold water river.

Basically, I’ll flush torrents of water through your rug with my artificial river, purging it of any dirt and soil. It’s the Old World way with a modern twist. Finally, your rug will be dried in my temperature and humidity controlled facility. Oh, and in case you were wondering, I actually do the cleaning myself. I don’t send it off to a third party like many companies do…without telling you.

Once it’s dried and prepped for return, you and I will put our heads together and pick a good time when I can bring it back. I’ll even help you roll it out where it goes if you’d like.

Let’s get real…I love cleaning rugs. No, I mean, I really, really LOVE cleaning rugs. And I’m good at it. So it honestly pains me to think you could make the mistake of letting some yahoo clean your rugs instead of me. There’s no telling what could happen. Yes, wool rugs are hearty, but they still need to be respected. Please, give me a call today and I’d love to get started on cleaning yours.